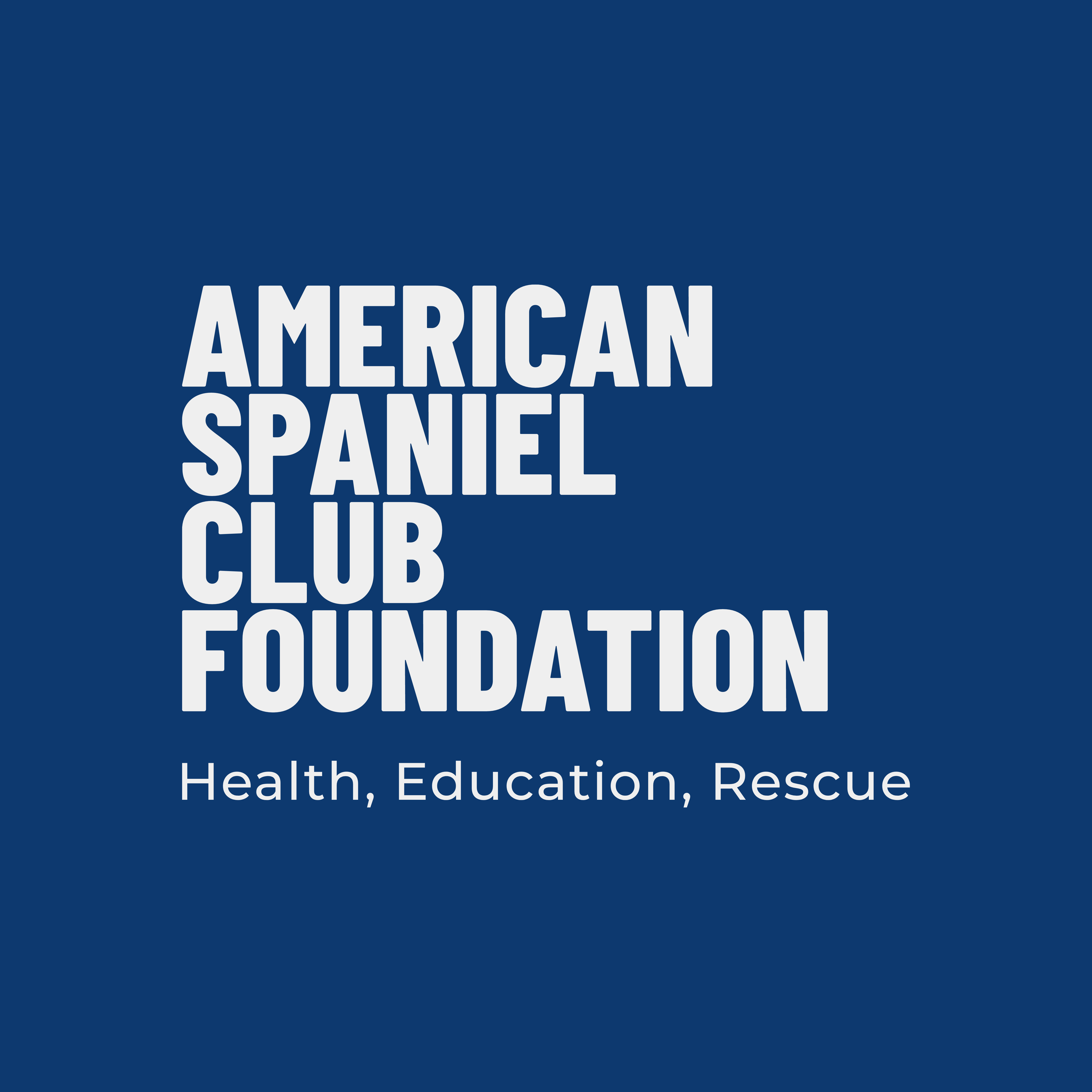 WHY THE AMERICAN SPANIEL CLUB FOUNDATION?

People often ask “why a foundation” since at first blush the American Spaniel Club Foundation may seem unnecessary or even in “competition” with ASC, but the answer is simple – ASCF is a critical component in the entities’ shared purpose of working for the health and welfare of spaniels.

The American Spaniel Club Foundation (The Foundation and/or ASC Foundation and /or ASCF) is the only nonprofit 501c3 with the mission of bettering the life of Cocker Spaniels through research, education, and rescue.

We achieve this mission through a series of initiatives.

All of these initiatives are to better the lives of Cocker Spaniels everywhere.  They are funded by frequent fundraising programs, legacy giving initiatives, and communications performed in partnership with American Spaniel Club members, the Cocker Spaniel fancy, and corporations.

In addition, as the ASCF we have reached out to the Foundations of the other spaniel breeds and with them have formed a discussion group called the Spaniel Health Initiative with the intent to share health and research focus, programs, and funding across the clubs and their foundations. We hope to find commonality among the spaniel breeds where we can leverage and fund research together as a group. Included in this group, at the moment, are the English Cocker Spaniel, English Springer Spaniel, Welch Springer Spaniel, and Clumber Spaniel national breed club foundations.   Our long term goal is to uppdate our own Health Survey, identify the common causes affecting the Spaniel breeds, and share participation in clinical trials in the future.

Both ASC and ASCF are non-profit or not-for-profit corporations, but because of their different, yet complementary purposes they have received different designations under section 501(c) of the Internal Revenue Code.

Founded in 1881, the American Spaniel Club, Inc., was first incorporated in 1948 as a non-profit corporation under the laws of the state of New York. For reasons that are unclear ASC was again incorporated under the laws of the state of New York in 1974 and the Certificate of Incorporation stated that ASC intended “at all times to qualify and remain qualified as exempt from income tax under Section 501(c)(3) of the United States Internal Revenue Code.” The stated purpose of ASC in the Certificate however was “to function as a dog club.” Interestingly, in minutes from a Board of Directors meeting in 1977, it was discussed that it was “more desirable” to be a 501(c)(3), because contributions would be tax-deductible. The IRS, however, gave ASC a 501(c)(7) designation, because as a dog club with dues-paying members it fell within the definition of a social club under the Internal Revenue Code. With the 501(c)(7) designation, ASC has tax-exempt status, but contributions to it are not tax-deductible.

In the early 90s, cocker spaniel health problems and rescue became pressing issues and concerns for ASC and its membership. At the urging of  Board members Bill Cobb and Louise Milner, the Board of Directors of ASC voted to form a corporation to specifically address the health and rescue issues facing ASC and to meet the requirements for a 501(c)(3) designation in order to give donors a tax deduction for their monetary contributions. Thus, ASCF was formed in 1997 to maximize the ability to raise money for the challenges facing ASC, its members, and spaniels.

The Foundation was not formed to be a competitor of ASC, but rather to be a cooperative partner working to promote the primary interests of ASC. This partnership structure is very common in many non-profit organizations, including with other national parent dog clubs, and it provides an opportunity to have a club in which there are voting members while still allowing a vehicle for tax-deductible contributions.

SO WHY AMERICAN SPANIEL CLUB FOUNDATION?

The Foundation is the only nonprofit 501c3 with the mission of bettering the life of Cocker Spaniels through research, education, and rescue.     We provide an opportunity for individuals to make tax-deductible contributions, an opportunity for corporations whose charitable giving programs call for education and research efforts to make tax deductible gifts, an opportunity for corporations to match donations through their matching gift programs, and most importantly, to support the efforts of ASC to raise funds to support educational programs, rescue and research for the welfare and betterment of the Cocker Spaniels that have given us so much love and joy.